What I’m Covered in by the Day’s End

There is a reason that most moms have a drawer full of leggings, exercise pants and basic tees. And it has nothing to do with our genuine (but vague) resolution to squeeze in more Fitness Blender YouTube routines! The days I decide to put on a “nice” around the house outfit (usually jeans and a comic-book inspired t-shirt), I regret it. Here is a snapshot of what I’m covered in by the end of the day:

My own grease: Because it’s been three days since I’ve had a shower. On the plus side, environmentalists would love me. I’m a natural conservationist!

Crumbs: My boy has discovered his new favourite snack is soda crackers (while sitting on my lap).

Pee: My toddler announced she needed a diaper change, and when I picked her up, she immediately clamped her legs around my torso. That’s when I realized she had accomplished a day’s worth of peeing all in one go, and it had soaked through her cloth diaper, the cover and her pants… and now on to my shirt.

Blood: My son has hit the “Vampire Baby” stage. He is teething, and hasn’t yet figured out how to not bite me, so he is drinking a tasty concoction of milk and blood. The inside of my nursing bra now has little blood stains on a regular basis.

On a similarly bloody note, I haven’t trimmed my baby’s nails in a while, and now my chest looks like I was attacked by a baby Wolverine.

Peanut butter: I was too engrossed in the latest Guardians of the Galaxy Volume 2 trailer to realize my daughter was using my hoody as a napkin after her snack of peanut butter and crackers.

Sweat (from that awesome workout I fit in): And by workout, I mean carrying one 30lb child in a carrier on my back while pushing the other child in the stroller, on our way to the indoor play place, so I can then chase my wailing children around and stop my toddler from pulling off her diaper and throwing it down the slide for the second or third time.

Snot and tears: Usually it’s from my children, but sometimes it’s my own.

But through it all, I try to keep in my mind that I’m also covered by my loving Creator God!

He will cover you with his feathers, and under his wings you will find refuge; his faithfulness will be your shield and rampart. ~ Psalm 91:4

My Home, My Prison 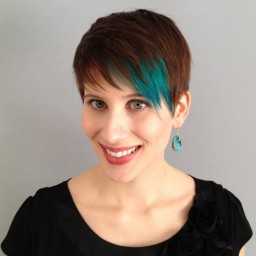 Mom, creative mover, communications consultant. Some days I feel like a snazzy peacock, others just a plain pigeon. Blogging about postpartum health and the rest of my mom dance at pigeonandthepeacock.com.

© 2020 The Pigeon and the Peacock. Theme by Anders Norén.